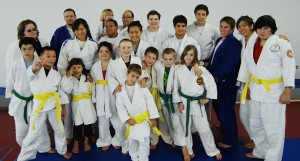 Judo has been a staple at The Menomonee Club for more than 40 years, leading one of the top Judo dojos in the country. Classes are for ages 4 & up with Beginner, Intermediate, and Advanced classes. Since 1997, the Judo Club’s students have more than 150 National and International medals, with more than 80 percent of its competitors medaling. Additionally, Sensei Brett Wolf helped pioneer the field of Paralympic Olympic Judo, with the Club being named the first Paralympic National Training Center in May 2012. Sensei Wolf was selected as 2013 Paralympic Judo coach of the year.

Sensei Wolf has been involved with Judo for over 30 years and is a former National Jr. Champion. He competed internationally multiple times for the United States. He received his black belt in September 1993 and is currently a Yodan (4th Degree Blackbelt).