You are here: Home > Windy City Fencing
By mtanimura on March 12, 2015 in Learn More About 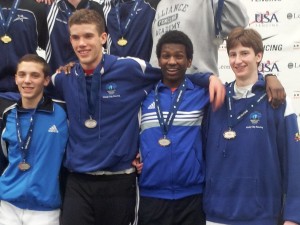 Windy City Fencing, a partner with The Menomonee Club since 2003, is the premier Chicago training to learn, hone, and master skills as a fencer. Led by former Olympian Tsanko Hantov, Windy City Fencing provides training from ages 5-adult, with beginner, intermediate, and advanced level classes as well as Bronze, Silver, and Gold teams for the students interested in taking their training to the competitive level. Windy City Fencing has produced top-level athletes including the 2014 Junior Olympic Silver Medalist team. Additionally, advanced athletes regularly earn athletic scholarships to top-tier Division I schools.

A graduate of the National Sports Academy, Sofia, Bulgaria, Tsanko Hantov has extensive experience training fencers at all levels. He competed in the 2000 Olympic Games and won from a Bronze medal at the 2001 World Cup in the Modern Pentathlon. He was a National Senior Champion in 1998, a National Junior Champion in 1995, and a 1996 Men’s Epee in Bulgaria. Hantov has been the owner and head coach of Windy City Fencing since 2005.